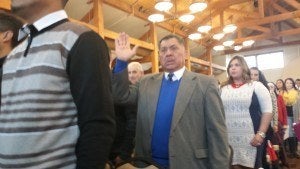 Earlier this month I had the pleasure – and I say that sincerely – the pleasure of attending a naturalization ceremony in Salt Lake City Utah.  There was standing room only as many guests had come to see their friends and family take the oath to become a US Citizen.  Nearly 200 immigrants became US Citizens.  For those of you who were worried about whether the American Dream is still alive – be assured that it is, at least for many of these immigrants.  I sat and watched them take the oath.  Near the end of the ceremony, Judge Sam, the federal judge who presided at this ceremony, allowed some of the new citizens to speak.  It was extremely touching and inspiring to hear the stories of the many years these people had waited to become citizens, and to hear them proclaim love for the United States of America.  Many of them thanked God and America for giving them this opportunity.

This is what makes America great.  We have a constant pipeline of new citizens who are so excited, and grateful to be US Citizens.  Doctors, nurses, engineers, and other professionals as well as hard working laborers became citizens.

They were issued Certificates of Citizenship, with their picture and name from the United States.  With that document, they can now apply for a U.S. Passport.  It might be hard to have to send in the original Certificate that they waited so long for, but it will be returned to them by the Department of State.  They actually handed out passport applications at the ceremony.  The passport will of course allow them to travel to many countries in the world.  The passport will be their proof of U.S. Citizenship

Another thing that was handed out at the ceremony was a Utah voter registration form. I thought it was kind of odd that the folks who were handing them out were having the prospective citizens sign the forms, which stated that they were US Citizens, before the oath had been taken!  I thought to myself it would be ironic if the US CIS officers who were there decided to grab those forms, and then start removal proceedings because they claimed to be a citizen before they actually were citizens.

I think every citizen should attend a naturalization ceremony.  It is inspirational and it is good to know that we have a new supply of people who love America and who know first hand how extraordinary and special this country is. 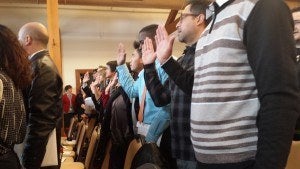