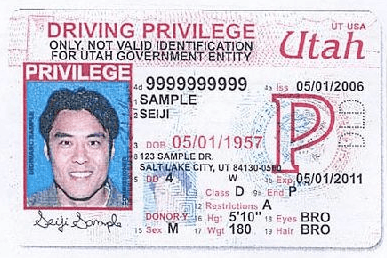 People who need to renew their Utah Driving Privilege Cards may want to think twice given the many arrests by people who have recently renewed their cards.  The Utah Driver Privilege Card was created to bring immigrants out of the shadows, to improve safety on the streets.  Allowing those who may not be documented to have state permission to drive is a benefit for public policy.  However, many have refused to succumb to the fingerprint requirements in order to obtain Utah Privilege card.  They do not trust the government with that information.  A growing number are also refusing to renew their cards, in fear that ICE may pay them a visit.

When Utah implemented the fingerprint policy for Driving Privilege Cards in 2011, only those with felonies or warrants would be turned over to ICE.  Back in 2011, a Utah Department of Public Safety official Nanette Rolfe stated, "If they're an individual that is upholding the law, there should be no reason the fingerprints should be shared with anyone unless there is a felony or outstanding warrant," Rolfe said. "There is no reason to be afraid."  According to some anecdotal evidence, this may no longer be true.

I recently had a client who believes he was picked up becuase he just renewed his Driving Privilege Card.  “Dominic” was an undocumented immigrant who has been in the U.S. 24 years.  10 years ago, he had a misdemeanor DUI in Utah.  He has had no problems with the law since.  He renewed his Driving Privilege Card as he has done for many years.  Three weeks later, ICE detained him outside his house.  This is not an isolated incident.  Many people who have old misdemeanor convictions are being picked up by ICE shortly after they apply to renew their Cards.  This action will very likely further reduce the number of applicants for the Driving Privilege Cards.  More people will be driving without a license.

People with any sort of criminal or traffic history may want to reconsider renewing their Driving Privilege Cards.  The application gives ICE their most current address, and clearly identifies undocumented individuals for ICE.  It is not known whether people with no criminal history still run the risk of being detained after applying for a Privilege Card, but surely many will not do so after these recent developments.

Our advice in the past had always been it was better to drive legally with a privilege card than not at all. Our advice is now changing to reflect the current practices of ICE.  It is better to not renew your Privilege Card, and not drive, if you are worried about an ICE encounter.  Driving without a license or a privilege card is not a good idea.  It will lead to criminal charges and may lead to incarceration and ICE encounters.